Lacing is the cording used to tighten and close a corset. Often string, yarn, or twine, it can also be made of ice-skate laces, ribbons, or leather. Usually the cording passes through eyelets at the center back of the corset, but some corsets lace at the front or sides.

Spiral lacing uses one cord to pass back and forth through eyelets that are set in a staggered pattern instead of directly across from one another in pairs - if used on parallel eyelets, it can cause the sides of the garment to be misaligned. It forms a zig-zag pattern with one end of the cord at the top and one at the bottom, and these can be secured in any number of ways. This method was the most common for 16th and 17th century corsets and bodices.

Ladder lacing is very similar to spiral lacing in that it can use one cord, but in this case the eyelets would be parallel and not off-set. It is also possible to accomplish this style with two cords or strings.

Double helix lacing requires two cords and is usable on parallel or staggered eyelets, and is a variant of spiral lacing. As the name implies, each cord forms a helix, angling one way on the outside and the other way on the inside.

This method is one of the most popular for modern corsets, and perhaps the one most envisioned when one imagines a corset. Criss-cross lacing is also found on most lace-up shoes. It is sometimes known as a baseball stitch, and that same effect can be accomplished if the sides of the garment are laced closed, or as close together as the laces allow.

It requires parallel eyelets and two cords, each of which passes back and forth across the gap into alternating eyelets, always in the same way (inside to out, or vice versa).

Over Under Lacing[edit | edit source]

Over-under lacing uses one cord and appears similar to criss-cross lacing, but because each cross is either outside or inside (so the cord goes through each vertical pair of eyelets the same way) friction is reduced between the cord, making it easier to tighten and loosen, and it is possible to lace the garment entirely closed. Many corset enthusiasts believe that this is the proper way to lace a corset. 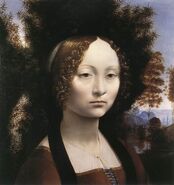 Spiral lacing on a gown with what appears to be an even number of eyelets and no correction made for the shifting of the garment. Portrait of Ginevra de Benci, Leonardo da Vinci, 1474

The back of a spiral-laced kirtle.

Over-under lacing on the front of a lovely green satin corset.
Add a photo to this gallery

The Zen of Spiral Lacing

Retrieved from "https://corset.fandom.com/wiki/Lacing?oldid=4032"
Community content is available under CC-BY-SA unless otherwise noted.